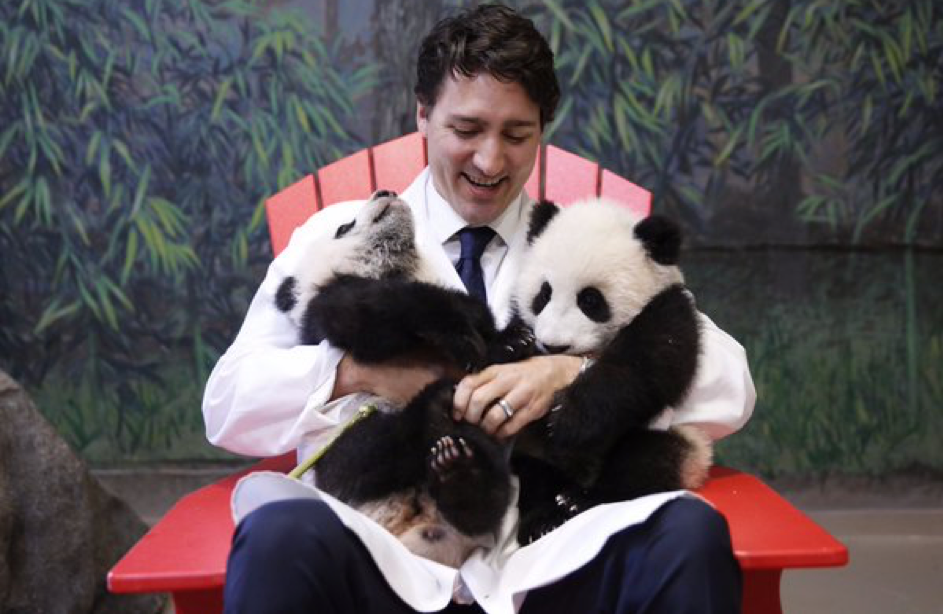 It is great living in Canada. Canadians have mighty mountains and turquoise-colored lakes. They have moose and bears. They have poutine and bear claws. They have friendly neighbors and attentive bus drivers. And they have perfect, beautiful Justin Trudeau. A panda-hugging, yoga-practicing Prime Minister, who’s latest misstep was eating chocolate in the House of Commons. But something is happening in Canada. For some months now, their international political symbol of friendliness and openness is stumbling. And it’s unclear how and if he will be able to rescue his squeaky-clean image. 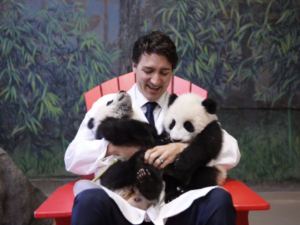 Canadian Prime Minister Justin Trudeau ran for office in 2015 with a campaign focusing on his charming, transparent and open image. He started his victory speech by saying: “Sunny ways, my friend, sunny ways. This is what positive politics can do.” Trudeau has a degree in literature and education, spent a couple of years teaching French and Math in Vancouver and even starred in a national tv-miniseries.

Since taking office, the Prime Minister has further built on his image. He started by appointing women and minorities to his cabinet. When asked why he insisted on a gender-balanced cabinet, he answered: “Because it’s 2015”. When Trump announced stricter boarders for Syrian refugees coming to the USA, Trudeau went to meet Syrian immigrants to welcome them to Canada and publicly announcing “To those fleeing persecution, terror and war, Canadians will welcome you, regardless of your faith. Diversity is our strength.” He promised to tackle climate change and boost opportunities for indigenous people. Photos and videos of the Canadian Prime Minister doing yoga, holding twin pandas and explaining quantum computing went viral. They all supported the image of a friendly nice guy, representing a fresh face of a progressive wave of kinder politics.

But Trudeau is now discovering that it’s a hard fall from a moral high horse. The Canadian Prime Minister is dealing with a political scandal from which he cannot charm his way out of. In short: Trudeau is accused of interfering in a corruption case involving SNC-Lavalin, one of Canada’s biggest companies. Former justice minister Jody Wilson-Raybould claims that the Prime Minister and his cabinet pressured her to go easy on SNC-Lavalin, as a conviction could possibly lead to job cuts in Quebec, Trudeau’s home province and a crucial electoral battleground. The political crisis has been unfolding after Canadians national newspaper The Globe and Mail first reported on the matter beginning of February. Since then, two prominent female members of cabinet resigned because they lost faith in their Prime Minister (one of who Wilson-Raybould), poll numbers are falling and serious questions about Trudeau’s leadership and integrity are raised.

The political scandal hit the Prime Minister hard. Why? Because it hit him in the heart of his personal brand and reputation. It is not so much about the facts of his actions. The accusations seem trivial compared with the many accusations levied at Trudeau’s North-American neighboring political leader. But for Trudeau, the affair is unavoidably measured against the expectations he has set for himself. He has built an image as a progressive politician, keen on open and transparent politics, indigenous rights and feminism. If he hadn’t focused on these topics so much, this crisis may have been less damaging for him. Trudeau puts himself right in the middle with those he has distanced himself from. Resulting in what looks like a politician making up in style and spin what he lacks in substance. A dangerous game to play.

The crisis Trudeau faces today is a perfect example of the importance of delivering on your promises. For politicians – but also for companies and brands – reputation is built on trust, consistency and authenticity. Delivering on that promise is crucial for the sustainability of your reputation.

So, what to do when the crisis subsides? How to rebuild your image? With the Canadian national elections in October, Trudeau has 6 months to regain what he can of his reputation.

First and foremost, a prompt and straightforward response is crucial. The degree of political damage Justin Trudeau sustains will depend on whether he can convince Canadians that he did nothing wrong. And time is of the matter.  As Warren Buffets famous quote goes: “It takes 20 years to build a reputation and five minutes to ruin it.”

However, Trudeau still hasn’t successfully addressed the crisis. He still hasn’t confirmed his squeaky-clean image. When facing a reputation crisis like this, only honesty can save you, not charm. It took the Prime Minister 1 month to come up with a response and when he finally addressed the press, he elaborated about his leadership style, his love for justice and the importance of jobs. No honest and straightforward apology to take the oxygen out of the crisis. A communication 101 mistake. And being honest and straightforward was just what Trudeau promised to be and the public was expecting him to be. Jason Lietaer, the president of the national communications firm Enterprise Canada, wrote in 10 bullet points what would have been the right message for the Prime Minister. His recipe: quick messages, plain language, a real contribution and an attempt to turn the page.

Second, it takes time to rebuild your reputation. Reputation is in delivery, not in promise. So, to start delivering again is crucial. This is the time to show, not tell. The trick is in showing and telling whilst you are doing. Getting the right message together with the right proof points. Not an easy challenge for the Canadian Prime Minister, with both fizzling climate and budget promises.

Either way, it seems that Justin Trudeau will need to abandon his narrative of “sunny ways”, a message that lost its credibility. A new interesting narrative must come into play. On top of that, Trudeau faces a very tricky challenge. When facing a reputation crisis, you have an opportunity to introduce real change. But as Trudeau’s image was built on the promise of a new way of doing politics, it seems that he will now have to compete in the old-style politics and restructure his image building. This political crisis has a big symbolic weight on Trudeau’s reputation, so it will be interesting to see how his campaign for the October elections will unravel.