A New Year’s resolution with a pinch of pride

Roughly 1 in 5 Canadians are foreign-born. That has been the case since the country’s founding. Why? Canada is a big country and has a lot of space to fill. So, it needs outsiders to fill it. Today more than ever, due to the upcoming labor shortage in Canada. The labor force participation rate is tendentiously decreasing and the need for foreign workforce is growing. It is a worldwide phenomenon, that the Canadians are tackling with a proactive immigration policy. Today, Canada opens its doors to a steadily increasing number of immigrants in hopes of attracting 1% of its population by 2020. Canada is one of a handful of countries where immigration has traditionally been a major shaping factor in society and culture. Incoming workers are an economic benefit, rather than a threat to the nation. That idea is deeply rooted in the country’s culture and results in the “open door” reputation of Canada.

However, the “open door” reputation is not at all what it seems. According to the WEF survey on Travel & Tourism Competitive Report, Canada is ranked amongst the worst in the world (120th out of 136 countries) when it comes to restrictive visa policy. Over the past 20 years, 5 million immigrants chose Canada as their new country of residence. However, the vast majority only entered the country after Canada also chose them. For years now, the Canadian government has developed a points-based system of immigration that carefully selects for skills. So only the lucky few are entering Canada. But how is that possible? How can Canada be so elective in their immigration policy and still have about 20% foreign population?

This is (of course partially) why: 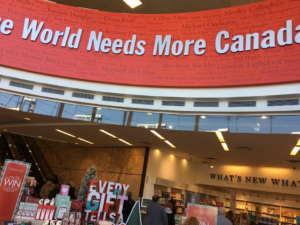 Canadians are proud about their nation or, as they call it, ‘homie’. But I mean, really proud. Imagine entering FNAC or INNO and the first thing you see is: “The World Needs More Belgium”. That would be strange, right? But not in Canada. Canadians are true patriots. They are proud of their vast and diverse nature, but also of their social services and liberal government. They look at the United States and are proud to be Canadian. And they want the entire world to know. Canadians celebrate their nation as if the national football team has won the World Cup on the same day all their Olympic athletes won a gold medal. As a Belgian, it is odd to see Canadian flags, sweaters, tattoos, posters, … all around the city streets. The 21st of July is just another day at the ‘out-of-office’ in Belgium. But for Canadians, the nation’s birthday is a moment to celebrate and be proud. And preferably as publicly as possible.

So, being proud as a way to be successful, grow and attract talent? Yes! It’s no coincidence that one of the leading psychologists on being proud is a professor at the BC University in Vancouver. Prof. Jessica Tracy reveals how our most misunderstood emotion – pride – hides a key to success. It is an often-maligned emotion. We are all familiar with its dark, hubristic side. It is after all one of the seven deadly sins. But pride is also essential for helping us to become our best. And, attract the best around us. It’s a strange concept for us Belgians. Because we are taught to be humble about our achievements, modest about our successes. However, most superachievers are motivated by pride. Successful athletes, entrepreneurs, artists, … have figured out how to avoid the bad kind of pride, while nurturing the good kind. Being proud can lead to improved performances, when it becomes a barometer of achievement.

In 2005, the city marketing campaign in New York “Made in NY” illustrates the palpable economic effect of pride. The Bloomberg administration was struggling to put New York back on the minds of investors and businesses. There was a real concern that many businesses would leave the city, particularly in the wake of 9/11. The brief was clear: New York needed a repositioning. That is when the “Made in NY” campaign was born. It told stories of real New Yorkers, emphasizing on the hard work, creativity and dedication. It tapped into the New York sense of pride to attract talent, business and investments. The campaign accounted for over $7 billion in economic impact. It became a reference for the added value of building a proud community around your brand. For pride as a pathway to measurable growth.

So, let this be my New Year’s resolution, my lesson learned after almost 1 year in Canada: don’t hold back on being proud. Whether it is in your personal life, in your professional career, as an entrepreneur, as a citizen, as part of a community, … Do what makes you proud as a starting point for growth. North-Americans master the not-so-subtle art of being proud. Not that they have more reasons to be proud than Europeans. I for one became a prouder European since living in Vancouver. Don’t get me wrong, I live in Vancouver, ranked fifth city for quality of living. So, no reason to complain here. However, it got me to reconsider my perspective on Europe. People here consider Europeans as more sophisticated than North-Americans. Canadians look at Europe as a reference of quality, knowledge and culture. It is time we Belgians start realizing this. Instead of focusing on things to improve, things going wrong. Instead of criticizing and complaining. Because, what good comes from it? Really? Does it attract growth? Talent? Does it motivate to go beyond? Does it inspire? Or is it instead worth to acknowledge what makes you proud? To act on the things that make you proud? Canadians have taught me that it is not always about criticism and modesty, but also about taking pride. So, my New Year’s resolution is clear: mix some North-American pride with our Belgian tendency of condemnation. “The world needs more Belgium”, èh?